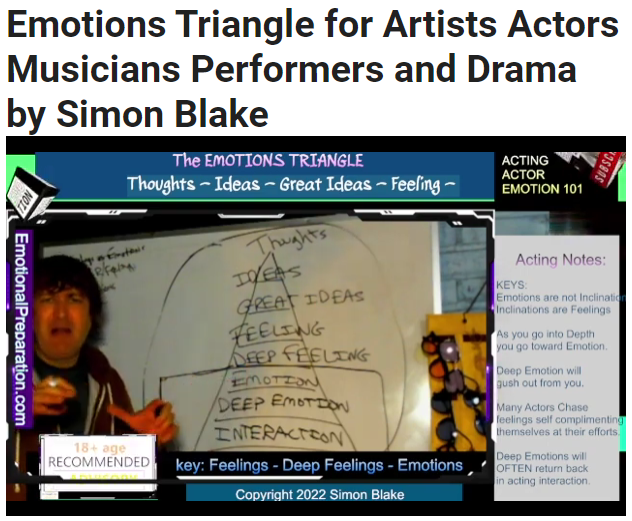 The Emotions Triangle & Layers give a solid understanding to Actors. Knowing that emotions lie beneath Feeling receptors is key. Feelings are inclinations. Feelings are receptors that if matured become emotions. Emotional Preparation is so difficult to learn for many actors because they prepare only on feelings. When Actors are patient to allow their Feelings mature into Emotions they find their Talent! You can find your talent by finding your emotions and interacting!

“When Actors are patient to allow their Feelings mature into Emotions they find their Talent!”
– Simon Blake

There’s a lot more on this triangle to work with and work from and work from within yourself than just your thoughts ideas and great ideas let’s look at it so the next one here i’ve got is feeling we’ve got feeling okay now every i mean i can tell you i’ve seen way way over 30 000 acting exercises from famous people to people who were planning to be famous so that they could. Emotions Triangle for Actors builds acting technique by knowing difference between emotions and feelings.

Emotional range happening within you that’s the goal so this is the goal of the emotions triangle thanks very much please share this with people it might help them a lot thanks. Emotions Triangle for Actors will help you build your own acting technique.

You’re Invited to: Actors Store – and Buy a Christmas Tree for Christmas All Year Rehearsing!

JOIN THE COMMUNITY!
Friend Me
Simon Blake
Simon Blake has studied well over 30,000 acting exercises in over a 20 year period. Studying Acting with a huge diverse range of Actors, from famous to unknown Talents.